Pictured: Miranda with her parents along with the three instructors she worked with (Justin, Susan and Cynthia) and PLA Founder, Kirsten O’Malley.

PNB ballerina gracefully balances the demands of dance and school

In an attempt to balance her passion for dance and school, Miranda opted to complete credit courses from Pacific Learning Academy to meet her high school graduation requirements.

A little over two years ago, Miranda was successfully attending The Overlake School, a well-known college-prep private school in Redmond, WA. Her family approached Pacific Learning Academy at the end of her Sophomore year to help Miranda complete a few courses that had been interrupted by her rigorous dance schedule. PLA was unique in that we could mirror the curriculum at Miranda’s school of record, making it possible for her to re-enter Overlake without missing a beat.

Skip forward two years, and Miranda found herself excelling at Pacific Northwest Ballet. The long hours continued to conflict with her schooling, and Miranda was confronted with a decision many young athletes face. How will I balance it all? She had already taken a few courses at Pacific Learning Academy, but now decided to take her remaining coursework to graduate from PLA, including Calculus AB and an independent study in Chinese. 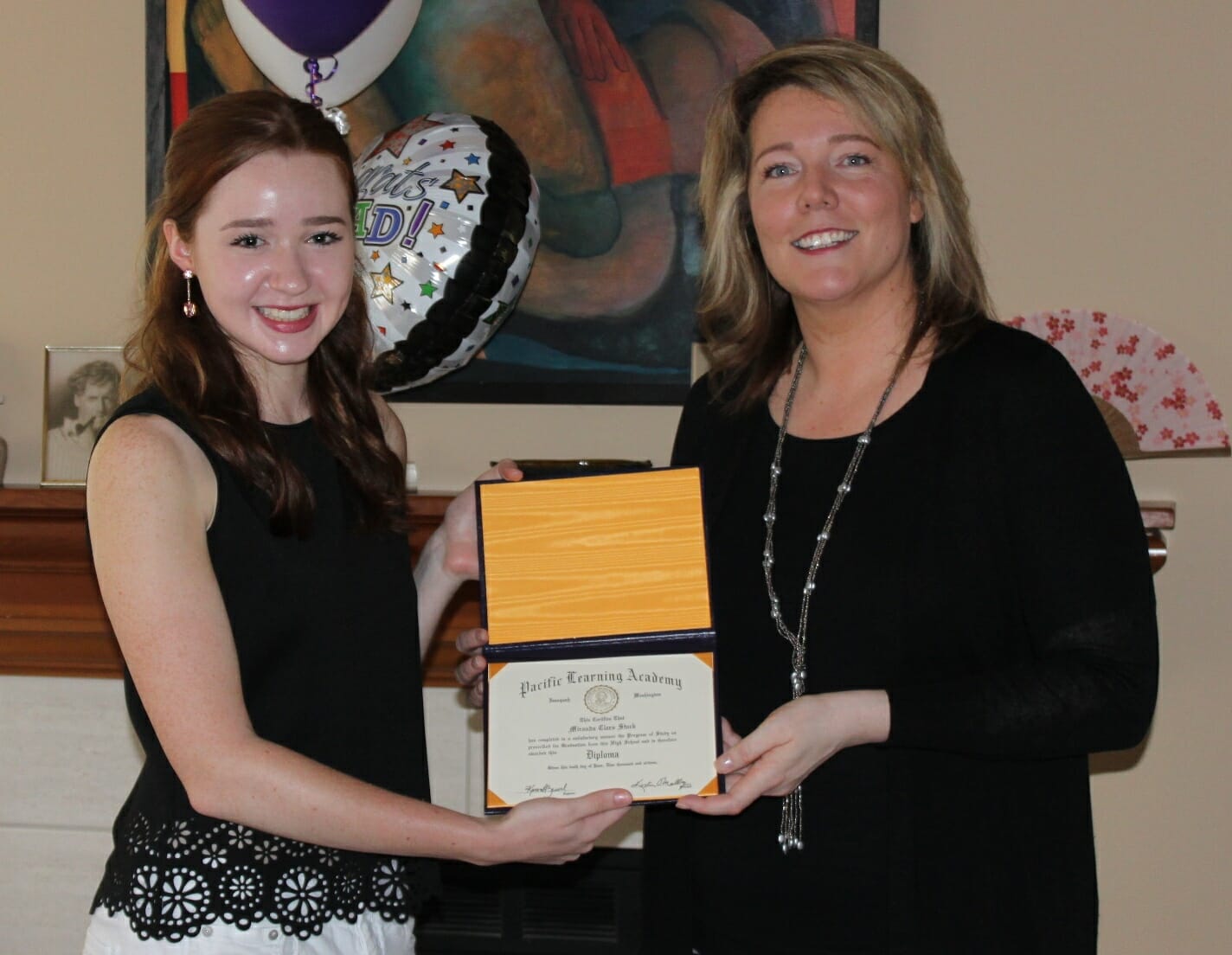 “A lot of students who are excelling in the arts or athletics, especially dance, find themselves at a crossroads. Do they follow their passion, something that has the potential to alter their future, or do they just give it up in order to go to school during traditional hours?” says Kirsten O’Malley, Founder of Pacific Learning Academy. “It’s hard to say goodbye to friends and beloved teachers, like Miranda did after 6 years at Overlake, and it truly says a lot about her commitment to her future profession that she was willing to follow her dreams. We are so proud to be a part of that dream, and to see her excel not only in dance, but in college-prep academics.”

Miranda graduated from Pacific Learning Academy this June and PLA’s intimate ceremony allowed each of her teachers to say a few words, as well as members of her family. eleven of which attended the graduation.

Mia Stuck, Miranda’s mother, shared that “[PLA instructors] were actually a part of our family. They were fantastic and delightful, and really instilled in Miranda a love of learning. They were not only her teachers, but took an interest in how she was doing and what was going on in her outside world. I don’t feel like we sacrificed anything. I feel like we gained a huge amount of family and friends through this program.”

Miranda will be at the Joffrey Ballet Chicago Training Program before she heads to the prestigious School of Dance at the University of Arizona, where less than 9% of applicants are accepted. We could not be prouder of Miranda’s accomplishments, and we wish this extremely hard-working, kind, and intelligent young woman all the best in her future endeavors!

Pacific Learning Academy is a one-on-one school offering single courses and dual enrollment, as well as full-time middle and high school. Pacific Learning Academy is Washington State Approved via the Office of Superintendent of Public Instruction (OSPI — see listings HERE) and an Accredited private school via AdvancED/Northwest Accreditation Commission (NWAC). High School coursework is approved by the National Collegiate Athletic Association (NCAA). We also offer tutoring in all subjects from 6th to 12th grade, including test prep, either in-home or local libraries across the Eastside (Issaquah, Sammamish, etc…). See more at www.PacificLearningAcademy.com.