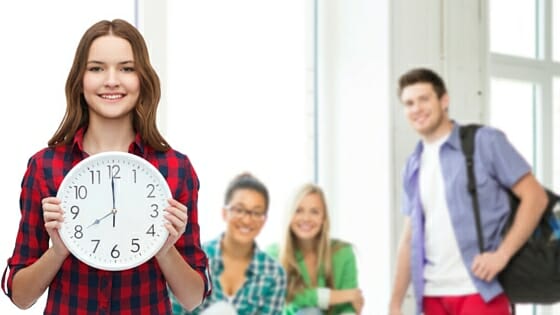 A decrease of teenage traffic accidents by 25%? An increase in SAT Verbal scores by 156 points? What could possibly have led to those successes in schools across the country? Both of these statistics are attributed to later bell times in the schools where these students were served.

Kids these days are busier than ever, and find themselves getting an average of an hour less sleep than students did in 1980. Unfortunately, going to bed earlier isn’t an option for most adolescents. Melatonin production and circadian rhythms in the typical teenager mean that they really can’t go to sleep until 90 minutes later than the average child or adult, meaning an earlier bedtime will lead to more time staring at the ceiling, not better rest.

Research is showing that schools could increase student safety with a later start time. A case study out of Kentucky found that teenage accidents went down by 25% after the school district shifted to a later time. As young adults are responsible for over 50,000 “fall asleep” crashes annually in the USA, making sure our teen drivers are alert and awake is crucial.

The research is there, and for that reason the Issaquah District is considering what the Bellevue School District has already decided. Later start times have a real and positive impact on students across the country, but there is no denying that bus routes, after-school activities (including tutoring!), student jobs, club participation, etc… will be adversely affected.

A recent article by Jody Mull (Eastside Education Network and a major Issaquah PTSA and Issaquah Foundation volunteer, among others) points out that “[m]any high school students work after school jobs, play sports, volunteer, participate in various clubs, and overall are engaged in many worthy and important activities. These activities aren’t just ‘extras’ – they are vital for students who may need to help pay bills or save money, are trying to build a solid record for applying to college and overall to prepare for life after high school.” For her own daughters, late-start Wednesday is her daughters’ least-favorite day and she’s troubled that the district may make every day one in which kids get out of school in darkness and have less time to fit in the extracurriculars that could very well shape their future.

While the Issaquah District has yet to decide for sure what they will do, it does look like later bell times will be inevitable. It will be up to all of us to make sure that our students are able to participate fully at school, have opportunities for sports, clubs and jobs after school (if they wish), have time for homework AND family time, and yes, get more sleep. Their brains, their health, and their future are depending on it.

To read more about how later start times have or might affect students:

How Have Schools Managed to Delay Bell Times? Reports and Case Studies
http://www.startschoollater.net/case-studies.html

Pacific Learning Academy is a one-on-one school offering single courses and dual enrollment, as well as full-time middle and high school. We also offer tutoring in all subjects from 6th to 12th grade, including test prep, either in-home or local libraries across the Eastside (Issaquah, Sammamish, etc…). See more at www.PacificLearningAcademy.com.